Posted on March 4, 2016 By Theresa @ TheCalicoBooks

February was the first month that I participated in The Pretty Books’ 2016 Classics Challenge, which is where each month you read at least one classic book of your choice. 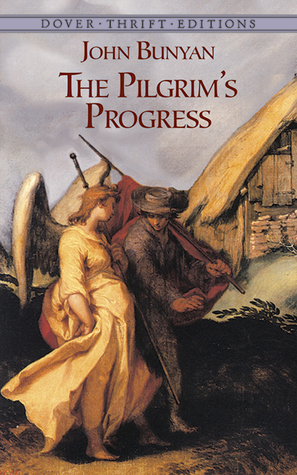 Synopsis: Often rated as important as the Bible as a Christian document, this famous story of man’s progress through life in search of salvation remains one of the most entertaining allegories of faith ever written. Set against realistic backdrops of town and country, the powerful drama of the pilgrim’s trials and temptations follows him in his harrowing journey to the Celestial City.
Along a road filled with monsters and spiritual terrors, Christian confronts such emblematic characters as Worldly Wiseman, Giant Despair, Talkative, Ignorance, and the demons of the Valley of the Shadow of Death. But he is also joined by Hopeful and Faithful.
An enormously influential 17th-century classic, universally known for its simplicity, vigor, and beauty of language, The Pilgrim’s Progress remains one of the most widely read books in the English language.

I’m not exactly sure when I discovered The Pilgrim’s Progress.  I think someone at my church mentioned it a couple years ago, and it was one of those books I was always going to look into, but never bothered to until years later.

WHY I Chose to Read It

I’ve had several people tell me this book was the perfect allegory for the Christian faith, and it was free at the Nook store, so I thought why not?

Well for starters, this book is over 300 years old.  It’s also a book that is thought very highly of in many churches, and many other Christian based organizations.

WHAT I Thought of This Classic

This book was okay.  For me, I’d say it was about 2 1/2 – 3 stars.  I gave it a 3 star rating on Goodreads, because 2 stars seemed too harsh.  Plus, the lessons that can be learned, and the reminder this book gives you on what it means to be a true follower of Christ are just as meaningful and important today, as they were in the 17th century.  The issue I had was that, while I’m sure this book was very influential and amazing when it came out, its pace and style is pretty clearly from the 1600’s.  This book was definitely written for Puritans.  Honestly, it took me almost 6 months to read this book, and it’s not even 200 pages.  I’m glad I read this book though, just because this story has been read by so many generations, and it’s interesting that despite all this time, this book is still being read, and influencing people, and is still being talked about.

Well, this book has been around for over 300 years, so I think it’s safe to say that this book probably isn’t going anywhere anytime soon.  However, I feel like it’s become lesser known throughout the years, so it may continue to decrease in popularity.  Despite that though, there are too many people who still really adore this book (I would imagine this especially so in the very strict Christian denominations, such as the Amish) for it to ever completely disappear or lose its “classic” status.

I would recommend this book to Christians who are interested in reading classic, Christian literature.  Or, this book would be interesting for anyone who is curious to read about what the Puritans read.

← Top Ten Tuesday
Book Review: The Boy Most Likely To →