Book Review | Gone with the Wind

Posted on January 20, 2018 By Theresa @ TheCalicoBooks 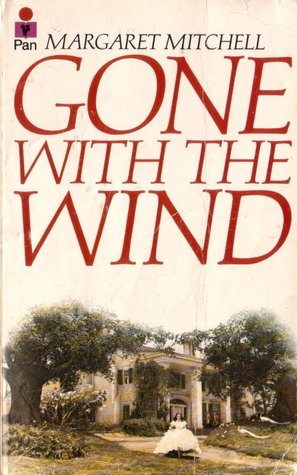 Title: Gone with the Wind by Margaret Mitchell

Gone with the Wind is a novel written by Margaret Mitchell, first published in 1936. The story is set in Clayton County, Georgia, and Atlanta during the American Civil War and Reconstruction era. It depicts the struggles of young Scarlett O’Hara, the spoiled daughter of a well-to-do plantation owner, who must use every means at her disposal to claw her way out of the poverty she finds herself in after Sherman’s March to the Sea. A historical novel, the story is a Bildungsroman or coming-of-age story, with the title taken from a poem written by Ernest Dowson.

Gone with the Wind was popular with American readers from the onset and was the top American fiction bestseller in the year it was published and in 1937. As of 2014, a Harris poll found it to be the second favorite book of American readers, just behind the Bible. More than 30 million copies have been printed worldwide.

Gone with the Wind is a book that I have been wanting to read for some time. I know of so many people who adore this epic novel, and I wanted to see what my opinions would be. Let me just say that this book is so much more than just a romance novel! Honestly, this review isn’t going to be able to fully capture everything I have to say about it, because there’s just so much I could say that I don’t even know where to begin, but I’m going to try my best!

Going into Gone with the Wind, I really knew very little about the plot. Honestly, all I knew about it was that it took place during the Civil War-era and it was about someone named Scarlett and Rhett. I’m really glad I didn’t know what to expect, because each plot twist and character development really left me on the edge of my seat, and I couldn’t wait to read what would happen next. There were several points in the story where I was like, “it feels like things are wrapping up how can there still be *insert large amount of pages* left?!” And yet, sure enough, something else would happen that would throw me, and the characters, for a loop, and suddenly all those 1000+ pages made sense. I truly savored every page, and not once did the story feel like it was dragging or contained unnecessary information. Every event and description really made Gone with the Wind what it was.

Then there were the characters! Throughout the novel, there were so many different characters, minor and major, and I really felt the contributions that each character made to the story.  Scarlett, in particular, made such an interesting protagonist, because she really did not carry the qualities of one.  She was scheming and selfish, and quite frankly, a rather unlikable character.  Yet, at the same time, her sass and strong will was really something I appreciated, and even though she’s a major brat, I ended up really loving her.    I think, deep down, whether we want to admit it or not, there’s just a little bit of Scarlett O’Hara in all of us.  Also, set in a period where women were deeply believed to be less than men, Scarlett’s character was quite ahead of the times, and I really loved how she was able to prove again and again what she was truly capable of.  Scarlett O’Hara is no damsel in distress!

Honestly, I felt like Scarlett perfectly mirrored the south and its rise, fall, and aftermath during the Civil War and Reconstruction.

I also appreciated the southern perspective of the Civil War.  In absolutely no way am I condoning the use of slavery or the behaviors of confederate soldiers, but it was interesting to read about kind slave owners, like Ellen and Gerald O’Hara, and how they they cared for and loved their slaves.  Gone with the Wind also gave me perspective on why some people, southern women especially, feared Yankees and the freedom of slaves.  It did a really great job of reminding me that there are two sides to every story.  Again, I definitely do not support slavery, I just found it interesting to read about the Civil War from a southern woman’s perspective.

The derogatory language and discussions of slaves, on the other hand, was very difficult for me to read.  America definitely still has many problems, especially when it comes to racial issues, but we’ve also come a long way from the Civil War, and I am certainly thankful for that.  Even the slave owners who were kind to their slaves still treated them more as pets than actual human beings.

Another issue I had with this book was Rhett Butler.  Fictional story-wise, he was such a match for Scarlett.  The sass, selfishness, and strong will really countered Scarlett well.  He also had some positive character traits that I really loved as well.  That being said, much of his actions and personality leave a lot to be desired.  I would consider many of his actions and behaviors abusive, and not once is it properly addressed as such.

All that being said, I really did enjoy this book.  It took me a long time to read it, but I really enjoyed every page.  Gone with the Wind sent me on an emotional roller coaster ride, and this is one book I will not be forgetting anytime soon!  I would recommend this book to anyone who enjoys historical fiction, as well as anyone who’s looking for a book about life, growing, and survival.

(I receive a tiny commission if you follow my BD links!)

One Comment on “Book Review | Gone with the Wind”