Posted on September 27, 2016 By Theresa @ TheCalicoBooks

Yikes! We are only 3 days away from October, and I’m just now posting about August’s classic…oops?  Better late than never, right? 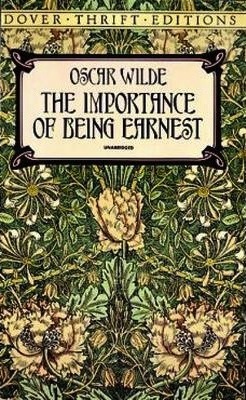 Synopsis: Here is Oscar Wilde’s most brilliant tour de force, a witty and buoyant comedy of manners that has delighted millions in countless productions since its first performance in London’s St. James’ Theatre on February 14, 1895. The Importance of Being Earnest is celebrated not only for the lighthearted ingenuity of its plot, but for its inspired dialogue, rich with scintillating epigrams still savored by all who enjoy artful conversation.

From the play’s effervescent beginnings in Algernon Moncrieff’s London flat to its hilarious denouement in the drawing room of Jack Worthings’s country manor in Hertfordshire, this comic masterpieces keeps audiences breathlessly anticipating a new bon mot or a fresh twist of plot moment to moment.

This finely produced volume is an unabridged, unaltered reprinting of an authoritative early British edition.

I had heard of this book, along with Oscar Wilde’s other works, probably since early high school.  However, it wasn’t until I discovered this book while cleaning, that I took an interest in actually reading it.

I’ll be honest, it was almost the end of August, and I still hadn’t read anything that could be considered a classic, and The Importance of Being Earnest was the smallest classic I could find…

Oscar Wilde was such an incredibly gifted author.  This play, in particular, is one of his most well-loved pieces.

I was so pleasantly surprised by this one!  I went into this book knowing almost nothing about what it was about, other than the fact that it was a play, and people love Oscar Wilde.  Honestly, I did not know what to expect before starting this book.

The Importance of Being Earnest is so well-written.  The dialogue is witty and clever; I literally laughed out loud in parts.  The premise of the story is actually quite silly and unrealistic, but I think that is what makes it so great.  The characters are so fun as well.  Yes, everyone is a little shallow, especially the girls, but that is what makes the story.

Also, I absolutely love the title as well.  After reading this story, you’ll see it’s such a clever play on words.

This book is super short, so you could easily read it in an hour or two.  I definitely see myself re-reading this one in the future.

I definitely think so!  This story is so clever, and very likable, I imagine people will continue to read this for years and years to come.

First of all, if you love reading plays, you definitely need to read this one.  Also, I’d recommend this book to someone who is interested in reading more classics.  I find that sometimes classics can be quite intimidating, and this one was not at all!  Actually, it sort of reminded me of that old ’90’s movie, The House Sitter starring Steve Martin and Goldie Hawn.  So, if you like that movie, I’d recommend The Importance of Being Earnest to you, too!