Posted on October 22, 2016 By Theresa @ TheCalicoBooks 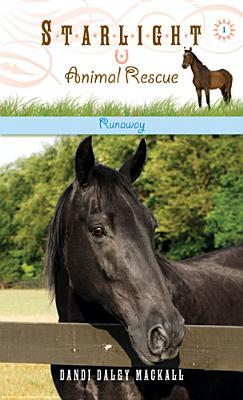 A new series by Dandi Daley Mackall, author of the best-selling Winnie the Horse Gentler series!
I’ve run away seven times—never once to anything, just away from. Maybe that’s why they call me a “runaway,” and not a “run-to.”
Meet 16-year-old Dakota Brown. She used to love all things “horse” until she lost everything, including hope. The minute she sets foot on her foster parents’ farm—Starlight Animal Rescue—she plans her escape. But can an “impossible” horse named Blackfire and this quirky collection of animal lovers be the home she’s always dreamed of?
Starlight Animal Rescue: Where problem horses are trained and loved, where abandoned dogs become heroes, where stray cats become loyal companions. And where people with nowhere to fit in find a place to belong.

When I was in middle school I loved the Winnie the Horse Gentler series by Dandi Daley Mackall.  Runaway is actually somewhat of a spin-off series of those books, and I was so excited to read it, but then…I never got around to actually reading it…Until now!

When I first started this book, I was unsure if Runaway would have the same charm as the Horse Gentler series.  For one thing, one of the things I loved so much about that series was the characters, and so, because the original characters weren’t going to be there, I was afraid I wasn’t going to like the characters in this series as much (In case you’re wondering, this series focuses on Catman’s, from Winnie the Horse Gentler, cousins.  Both Winnie and Catman correspond with the family through email, but so far, this series doesn’t spoil anything from the previous one).  For another, like I said, I was in middle school when I read the original series, so I just wondered if this series would simply not have the same appeal to me.  That was not what happened!

This book was so enjoyable.  I found myself really loving the characters.  Everyone is so unique, and they all face their own struggles and triumphs.  I really felt the characters’ authenticity.  There are some heavy topics in here, and Mackall did a great job, in my opinion, of getting the importance across without it being too mature for younger readers.  Each book in the series focuses on a different character, and I am really looking forward to getting to know every single one of them.

The storyline is a bit predictable, but honestly, based on the description, the cover, and the intended audience, I really did not expect it not to be.  Despite that, there were a few scenarios that left me wondering how things were going to work out.

Also, I love how animals are incorporated so deeply into this series!  Just like in the Horse Gentler series, they are more than just a prop.  As an animal lover, I loved reading about all their descriptions and the relationships and bonds that they formed with their humans.

Runaway was an excellent start to, what is sure to be, an excellent series.  I would definitely recommend this book to animal lovers, especially if you love horses.  I’d say the intended audience for this book would be tweens, but at 22, I found it to be a super enjoyable, easy read!