Posted on January 28, 2017 By Theresa @ TheCalicoBooks 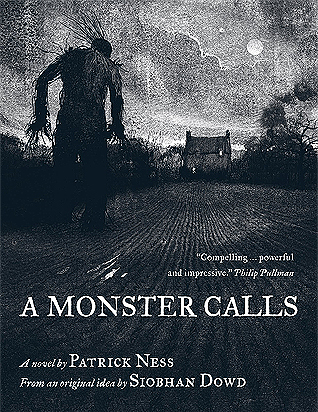 The monster showed up after midnight. As they do.

But it isn’t the monster Conor’s been expecting. He’s been expecting the one from his nightmare, the one he’s had nearly every night since his mother started her treatments, the one with the darkness and the wind and the screaming…

This monster is something different, though. Something ancient, something wild. And it wants the most dangerous thing of all from Conor.

It wants the truth.

A Monster Calls was only the second book I finished in 2017, and I’m just going to go ahead and say that this book will be on my list of top 10 books read in 2017.  I read this book because of the hype, and thankfully, the hype for this book is so deserving.  A Monster Calls did not let me down!

This review is probably going to be shorter than usual, because I don’t know what to say that hasn’t already been said.  Yet, despite that, I still really wanted to write a review because I loved it so much!  The emotion in this novel is just so raw and real.  It was written in such a way that you, as the reader, truly feel Conor’s pain, denial, hope, and anger.  I am so privileged to not have had an experience such as Conor’s, and so I cannot pretend to even imagine how emotional and painful an experience like that can be, but I think the realization really hit me that people are losing loved ones to cancer everyday.  The struggles and the hardships that are faced in this novel are so many people’s every day life.  This novel is just so heartbreaking and powerful.

I’ll be honest, I was a little concerned whether or not I would enjoy this novel.  The only other book that I’ve read from Patrick Ness is The Rest of Us Just Live Here, and while I did enjoy that one, it was a little lackluster for me at times despite its high praise.  I was a little concerned the same thing would happen with me and A Monster Calls, but it didn’t!  From the very first page I was completely sucked into the story.  Even when I wasn’t reading, I found myself constantly thinking about it. I was so intrigued by the Monster, as well.

The original intended audience for this book may be middle grade, but everybody should read it.  This book has so many layers; it is one that can be read again and again.  Also, I highly recommend getting the original version of A Monster Calls, and not the movie tie-in edition.  The illustrations in this book are absolutely gorgeous and play such an incredible role in telling this story, and the movie version does not seem to have these illustrations.

Overall, this book is heartbreaking but beautiful.  It definitely lives up to its hype.  I would highly recommend it to everyone!