Local Supernaturals Who Demand a Book!

Posted on October 10, 2018 By Theresa @ TheCalicoBooks 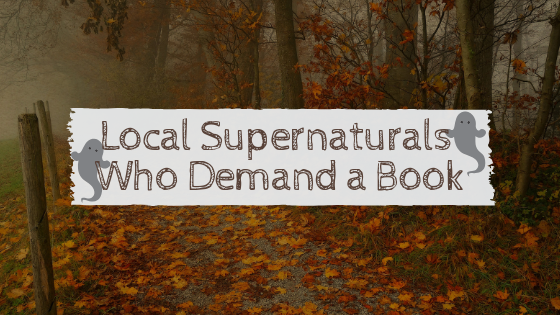 We are now ten days into Blogtober, and today I am back with another post for Blogoween!  I thought today’s prompt, hosted by Camilla @ The Reader in the Attic, was so perfect for Halloween, which is Local Supernaturals Who Demand a Book.  Basically, with this prompt, you can share scary stories about supernatural experiences that have happened where you live, or even to you!

Today, I’m going to be sharing a ghost story about Ohio, a hair-raising experience my sister and I had, plus the spookiest encounter my sister and boyfriend had one evening in our house.

Also, before we get started, I do want to include a kind of disclaimer on this post. Don’t ever try to communicate with the dead.  Don’t 👏🏼 play 👏🏼 with 👏🏼 ouija 👏🏼boards. Demons are real. So, please don’t talk to dead people or seek them out in any way. 🙃

This is probably the most well-known, “haunted” location in Ohio!  In Mansfield, Ohio, the Ohio State Penitentiary is an old prison, filled with a haunting past.  Tours and ghost hunts are available to go on, but you’ll never find me going there!  It was also the location used for the film, Shawshank Redemption! Here’s what the official website had to say about the hauntings:

Stone walls and iron bars they’re still here, but what of the humanity, if you can call it that, of the old Ohio State Reformatory at Mansfield. What of the 154,000 inmates who passed through it’s gates in it’s 94 years as a working prison. Not to mention their keepers, the Wardens, and the Guards, the gravediggers, and the rest, what of them remains? As it turns out, more than you might think. No matter what their crime, some sent to Mansfield have never left. They rest unclaimed in a cheerless graveyard just outside the fence. 215 numbered markers laid out row on row. Most were victims of disease, influenza, tuberculosis, but some died of less natural causes; From the violence, that is all to common inside any prison and was far from unknown in this one. And the worst of it occurred well away from the main cell block with their rows of cages stacked tier on tier, and inmates, one or two to a cell. There were too many eyes, too many witnesses here, no the worst of it was reserved for a far lonelier place, deep beneath the prison ground. A place called local control, or solitary, by some, known by everyone else as the hole. Near total isolation can crack all but the toughest of cons, but none was so alone that there wasn’t room for death. At least one inmate managed to hang himself, another set himself on fire, once two men left too long in a single tomb like cell, only one walked out, leaving his cellmate’s body behind, stuffed beneath a bunk. Could there be other similar surprises? Or words left over from the days before the prison closed? Even when they’re empty, some swear something walks these halls. It isn’t enough for contemporary visitors not to wonder off alone while sight seeing, what‘s become one of Mansfield’s more popular tourist attractions. But the bloodiest single incident in the old prison’s history occurred outside it’s walls. In July 1948, when the Reformatory’s farm boss, his wife and daughter were kidnapped and shot to death by two parolees bent on revenge. A six state manhunt for the so called mad-dog killers ended in a shootout that left Robert Daniels of Columbus in custody and his partner, James West dead. “I’ll get the Chair” Daniels told police as he signed the confession. And on January 3rd, 1949, he did. A year later in 1950 disaster struck again. This time, here in the living quarters of the Warden himself. The Warden’s wife, removing a jewelry box from a closet shelf dislodged a pistol from it’s hiding place. When it hit the floor, the gun went off inflicting a fatal wound. And within the decade, even more bad luck. The Warden, hard at work in his office, suffered a heart attack and died. All this was nearly 40 years ago and more, how then to explain the voices shaken tour guides swear they hear today? Man and woman talking, to faint to understand, to persistent to ignore and chilling to listeners who think they’re alone, only to find themselves apparently eavesdropping on the warden and his wife locked forever in an endless conversation from beyond the grave.

Next up, is an eerie experience that happened to my younger sister and I several years ago.  Even though it’s been a while, we’ve never forgotten this experience!

One afternoon, we were looking for our older sister.  She has one of those bedrooms where the staircase leads right up to her room, without a hallway or anything.  Well, we thought maybe she was in her bedroom.  So, we called up the stairs and asked if she was up there.  Clear as day, we heard a voice say, “No.”  Well, we thought it was just her being sarcastic, so we ran up the stairs to go get her, but once we were at the top, we saw she wasn’t up there.  My younger sister and I just looked at each other for a minute, and then ran down the stairs as fast as we could.  Once we made it to the bottom of the steps, we realized that our older sister had been outside the entire time.  We still have no idea what that voice could have been.

The last tale I have to tell you is one that happened to my older sister and her boyfriend about a year or two ago.  It was late one night, and they were watching a movie in the basement when they fell asleep.  They woke up to the TV just being static.  That was odd in itself, because this isn’t the old VHS days where the movie flips off after it’s over.  They then realized that wasn’t the only odd thing going on.  Upon a closer look, the TV was on channel 666 and they noticed a random red light was blinking on the TV that doesn’t usually blink.  And then one of the ceiling tiles randomly fell from the ceiling!  Needless to say, that certainly woke them up, and they quickly left the basement.

I think it’s safe to admit that these days I sing God is Bigger Than the Boogie Man when I make my way downstairs.

I hope you enjoyed reading about these spooky experiences! I definitely think that last one could be made into a book.

Have you had any spooky encounters that you think would make a good story?

(I receive a tiny commission if you follow my BD links!)

2 Comments on “Local Supernaturals Who Demand a Book!”