Book Review | The Chronicle of the Three: Bloodline 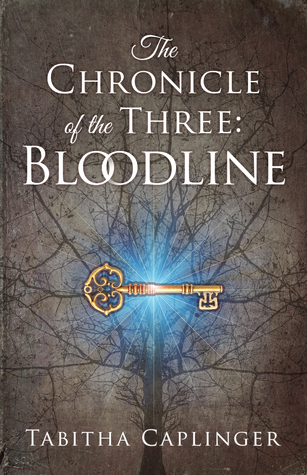 Zoe thought the loss of her parents would be the most difficult thing she’d ever have to endure. When she began seeing things she couldn’t explain in her new home of Torchcreek, Virginia, she was sure the grief was driving her mad. Instead Zoe discovers she is part of an ancient bloodline, one destined to defeat the powers of darkness from condemning the world. But Zoe, the daughter of the three, isn’t just another descendant–she’s the key to humanity’s salvation.

In this first installment of the Christian fantasy trilogy The Chronicle of the Three, Zoe Andrews learns that not all shadows are harmless interceptions of light. Some are a more sinister darkness that wants to torment the soul.

* I received this book in exchange for an honest review.*

I was pleasantly surprised by this book!  Going into The Chronicle of the Three: Bloodline (which from this point on I will just refer to it as Bloodline, because wowee, that’s too long of a title for me to constantly refer to it as), I wasn’t really sure what to expect.  I’m very glad I gave this little book a chance though!

Bloodlines is a rather short book, coming in at just a little under 200 pages, which is great, because it means you could easily finish it in a sitting or two, if you wanted.  Despite its size though, it’s very action packed!  Demon hunting is quite popular right now thanks to TV shows such as Supernatural and series like The Mortal Instruments, and while this book might not have been as complex as those series, it was very entertaining, and shows a lot of promise.  I also really appreciated a Christian perspective on this topic.  Bloodlines manages to include God in a way that a lot of other series don’t, and yet still manages to not come off as preachy.

Another thing I really loved about this novel was Claire and Zoe’s relationship.  Their characters were just very dynamic together, and their relationship felt very real.  I also really enjoyed reading about Zoe and Daniel’s relationship.  I’m curious to see what comes next with the two of them.  In the book 2, I also hope we get to learn  more about Claire’s past!

While I didn’t mind the book’s short length, I do think it made this novel a bit rushed through in parts.  For example, we lose track of a couple Zoe and Daniel’s friends about halfway through the novel, and don’t hear from them at all except in passing at the end.  Also, I don’t want to spoil anything, but a certain character’s entire personality changed virtually overnight.  I do get what the author was going for, and I realize that this sudden change was kind of the point, but still, I just felt like it happened too fast.

One more thing that might come across as a bit negative, was that, at times, Bloodlines felt a bit cliche.  For me personally,  that didn’t bother me.  Sometimes a little cliche in a book is fun!  This book definitely felt original though, and the actual story line was very unique to me; it was mostly a few character interactions that felt just a tad formulaic.

Overall, this was a good book!  I really enjoyed reading it.  It was very action packed, and I do plan on reading the sequel.  I would recommend Bloodlines to fans of the Mortal Instruments series, and anybody else who is looking for a fun, action, good vs. evil book.  Plus, what’s nice about this book, is that wile there is violence, none of it is super descriptive, and it does not include any language or sexual content, aside from some innocent flirting, which makes it suitable for younger teens and tweens as well!

Oh yeah, Zoe also does ballet, and any book that has ballet in it gets bonus points from me! 😉