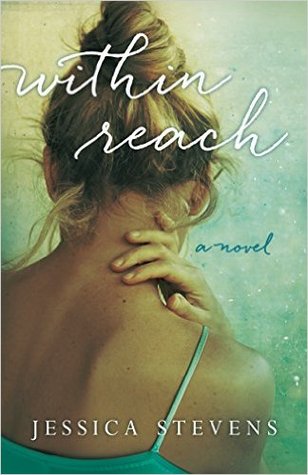 Title: Within Reach by Jessica Stevens

Dying wasn’t on seventeen-year-old Xander Hemlock’s summer to-do-list. Finding ways to spend more time with his girlfriend, Lila, was the most critical thinking he planned on doing. But that was before he found himself trapped in a realm of only darkness with thirty days to convince Lila he’s not actually dead—well, not completely, anyway.

As Xan tries to show Lila she isn’t alone, she struggles to comprehend how her life has changed so completely. Six months ago her life was perfect: she was on her way to becoming a professional dancer, her parents were still married, and her boyfriend was alive. But now, with her anorexic tendencies stronger than ever, she must decide which is the lesser of two evils: letting go to be with a boy she doesn’t love, or holding on to the unreasonable, yet overpowering, feeling that Xan is still within reach…and trying to show her something.

Improbable and endearing, Within Reach is a story of two soulmates discovering that sometimes it takes more than one lifetime to get it right.

* I received this book in exchange for an honest review.  A huge thank you to Sparkpress and Netgalley.*

After reading the synopsis for Within Reach, I was instantly intrigued.  The story sounded very unique, Lila was a ballet dancer (my favorite!), and plus, look at that cover; it’s gorgeous!  So, I think it is safe to say that I was quite excited to read this book.  While there were certain parts in the book that I didn’t care for, overall I quite enjoyed it!

Something that I really liked was the alternating viewpoints between Xander and Lila. It really helped to flesh out the story, in my opinion.  I also liked how the reader had to discover what was going on along with Xander.  There were quite a few twists in this book that I, surprisingly, did not see coming at all!  I absolutely loved that.

The characters were also really interesting.  I was honestly impressed with every single character in this book.  The relationships, interactions, and conflict were so realistic.  I was so invested in how they each played a role in this story.

Another thing that I really enjoyed about Within Reach, was how beautifully written it was.  The sentences just flowed so well together, that I just flew through this book!  It is a rather quick read, but it is still quite poetic.

The concept  of soul mates, while a bit confusing at times in this book, was very original.  There were things I liked and disliked about it.  I disliked the fact that Lila and Xander were so obsessed with each other.  I get where the author was going, after all they are soul mates, they form each other, but still…it felt too…possessive at times.  For example, there is one scene in particular, where Lila tries to move on and get her life back together after Xander’s death, and essentially, he gets punished for that.  That felt unhealthy.  Despite that particular issue, however, the rest of the idea about soul mates I really enjoyed.  It was about more than just being in love and the physical aspect of a relationship, and I really appreciated its depth.

I also disliked the way Christianity was portrayed in this book, especially when it came to the pastor.  Now, I admit, there are definitely pastors that are a tad creepy, ill-informed, and unfit to lead a congregation.  However, if I were not already a Christian, this book would have probably given me the impression that all pastors and church folks are the same, which is most certainly not the case.

There was also one last issue I had with this book.  I won’t say much, because I want to avoid spoilers, but it bothered me how calm Xan was over the fact that there was a dangerous person nearby.  That is all I am going to say though, because, like I said, I want to keep this review spoiler free!

Despite the few problematic things in this book, I really did enjoy it!  I only wish there were a sequel.  There were quite a few loose-ends that I would have loved to have tied up!  If a sequel is ever written, I will definitely read it.  I would love to read about what happens next!

Overall, this was an intriguing, fast-paced read.  It was a very original concept, and despite the issues I had, I thoroughly enjoyed reading it.  I would recommend this book to anyone who is interested in supernatural things, as well as beautiful love stories.