Can you believe it? I’m actually posting June’s classic in June! :O 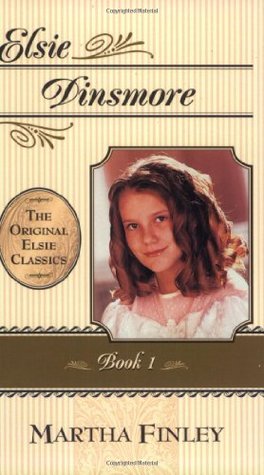 Synopsis: In this first volume in The Original Elsie Dinsmore Series, sweet, motherless eight-year-old Elsie struggles with several bewildering problems. She has never known her mother, and her relationship with her father is filled with misunderstanding and tears. The young girl learns to depend wholly upon her faith in her heavenly father.

When I was little, I loved the A Life of Faith versions of the Elsie books. Growing up, they were some of my absolute favorites.  I later found out they were an adaptation of this original series.

Ever since I found out there was another version of these books, I wanted to read them.  I had heard the originals were a bit controversial, so I was curious to check them out for myself!

Elsie’s faithfulness and Christian morals has been long admired.  Plus, any book that has been in publication for nearly 150 years is considered a classic to me.

I was unsure what to rate this book. For me personally, I enjoyed reading it, and being able to go back into Elsie’s world. I loved the A Life of Faith versions so much when I was little, and while there definitely were things I did not like in this real version, honestly, I still enjoyed this book, story-wise, just as much as the updated version. I also love Elsie’s perseverance. Her faith is definitely inspirational, and something I think all Christians should strive to be more like.

That being said, it was disturbing to read of the emotional, and nearly, physical abuse that went on in this book that was written off as stern but fair punishment. Poor Elsie is often under the impression that she is a terribly naughty child, when in actuality she is the most obedient child in a way that is humanly possible. I also found it creepy when a grown man told 8-year-old Elsie, “If only you were ten years older.” It’s even creepier to me, because I know they actually do get married someday! I realize the world was a very different place when this book was written back in the 1800s, before even slavery was abolished, but still…

I don’t know.  There was a lot of problematic content in this book.  I’m glad I had the A Life of Faith versions to read when I was little.  If Mission City Press had not gone out of business, and those versions of the story were still being published, I think they would have eventually taken the original versions’ place.

I would recommend this book to people who, like me, enjoyed the A Life of Faith books. It was interesting to read the similarities and the differences between the two. People who enjoy reading old-fashioned books would enjoy these as well.  However, I would NOT recommend these books to young, impressionable children, who the books are really targeted for.  The way most of the adults treat the children in this book is not good. If they want to read about Elsie and friends, they should stick to the adapted versions.