Posted on July 9, 2016 By Theresa @ TheCalicoBooks 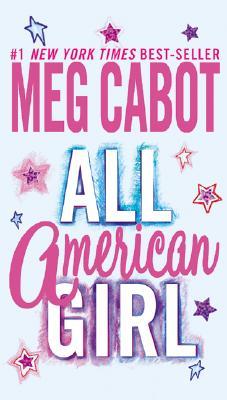 Samantha Madison is an average, cool Washington, D.C., teen: She loves Gwen Stefani (who doesn’t?), can draw like nobody’s business, and enjoys being opposite to her sister’s annoying ultra-social personality. But when she ditches art class one day, she doesn’t expect to be jumping on the back of a wannabe presidential assassin.

Soon the young hero is receiving worldwide acclaim for her bravery, having dinner with her family at the White House, and is even being named teen ambassador to the UN. As if this weren’t enough, she and David, the president’s son, strike up a friendship that everyone wants the dirt on, which starts to give her romantic “frisson” feelings.

Unfortunately, Sam thinks her sister’s boyfriend, Jack, is the true love of her life, and she makes a few wrong turns that could screw up what she’s developing with David. Will she ever stop following what she knows and start following what she sees?

I bought this book forever ago at a library book sale, but I never got around to reading it.  In honor of the 4th of July, I finally decided to read it last weekend…it sounded like a somewhat patriotic read(?)!  While this book wasn’t the greatest book I’ve read in 2016, it was a lot of fun, and a very light-hearted read.

Like I said, this book was very fun; it’s not really all that realistic, but it is super fun nonetheless.  That being said, I do not think this is Meg Cabot’s best work.  I love Meg Cabot’s writing style, and all the amazing, sassy characters she creates.  This time around, however, things felt a bit…recycled.  I felt this particularly so with Samantha.  While I really liked her character, she felt so much like Mia from the Princess Diaries series.  I will say that I loved her sisters.  I particularly loved Lucy; even though she was the typical cheerleader/popular girl, she wasn’t a jerk!  She actually cared about her sisters and family.  I loved that she would even call out her boyfriend when he being obnoxious or crossing a line.

The romance in this book was fun too.  It was all very innocent, which was nice. Also, because it is a Meg Cabot book, the love interest is adorably charming, and there are so many cute moments in this book you might get little hearts in your eyes.

I always love reading/watching things from the early 2000’s.  They always makes me chuckle, because books and movies and TV shows always seem to be written in a way that makes them try to appear relevant and “modern” with the times, and now, almost 15 years later (Yikes! How did 2002 become so long ago??) so much has changed.  It’s actually really interesting, if you can get past all those old trends…hahah

Overall, All-American Girl, while not Meg Cabot’s best, was still a very enjoyable read (and let’s be honest, even if it’s not her best, it’s still Meg Cabot, and her worst is still great).  It was just what I was looking to read over the 4th of July weekend: something light and easy, and yet American-y!  I would recommend this to fans of YA contemporary, especially Meg Cabot fans, and anyone looking for a super cute, light, easy read.