I want to apologize for the lack of posts this month!  I have been absolutely terrible keeping up with book reviews, and really, all posts in general.  Honestly, I just haven’t had a lot of time on the computer these past couple of weeks, and writing entire posts on my phone is not an enjoyable experience lol.  I will try to post more consistently again from here on out! 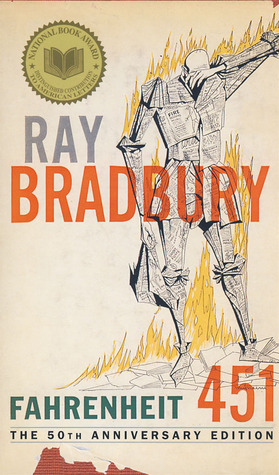 Synopsis: The terrifyingly prophetic novel of a post-literate future.

Guy Montag is a fireman. His job is to burn books, which are forbidden, being the source of all discord and unhappiness. Even so, Montag is unhappy; there is discord in his marriage. Are books hidden in his house? The Mechanical Hound of the Fire Department, armed with a lethal hypodermic, escorted by helicopters, is ready to track down those dissidents who defy society to preserve and read books.

The classic dystopian novel of a post-literate future, Fahrenheit 451 stands alongside Orwell’s 1984 and Huxley’s Brave New World as a prophetic account of Western civilization’s enslavement by the media, drugs and conformity.

Bradbury’s powerful and poetic prose combines with uncanny insight into the potential of technology to create a novel which, decades on from first publication, still has the power to dazzle and shock.

I think I first really heard about Fahrenheit 451 in high school, or maybe, middle school.  At the time though, I really did not have an interest in reading any kind of classic literature outside of the classroom.  A lot of the classics I was required to read for school at that time were, in my opinion, rather dry.  It wasn’t until I graduated from high school, and took a gap year, that I really discovered the beauty of classic literature, and that it wasn’t all boring and hard to understand.  I’d say that’s about when this book really came on to my radar.

The premise of this book is just so intriguing!  Plus, I read Something Wicked This Way Comes by Ray Bradbury last year, and I just fell in love with his writing style.

Even though this book was written in 1953, the themes and general message of this book is still so relevant in 2016.

I thoroughly enjoyed this book!  I’m almost certain it is going to be on my list of the best books I read in 2016.  I went back and forth between giving it a 4 or 5 star rating on Goodreads.  I ended up giving it a 4, but it is really a 4.5.

First of all, Ray Bradbury was truly an incredibly gifted writer.  I absolutely love his writing style and his way with words.  This is one of those books where I found myself going back and rereading sentences simply because they were so savory and skillfully crafted (I now sound like I’m describing a steak instead of a book! Haha).

The story in itself was so good as well.  While, for the most part, our society is not nearly as bad as the society Guy Montag lives in, some of the very same issues in the book are prevalent today.  The little shells that everyone wears in their ears really stood out to me.  How many of us are constantly check our phones?  Not that anything is wrong with smartphones and technology (I am actually super thankful for all of it!), but sometimes we do miss out from fully experiencing something like the people in Fahrenheit 451 because our focus is elsewhere.

Another thing, I think we’ve all felt that desire for something more meaningful, and questioned what we are doing and thinking, just like Guy did.  This book was a great reminder to not settle and simply conform to what is told to you. Ultimately, Fahrenheit 451  left me with hope.

This book will definitely stay a classic.  As long as people continue to treasure books and knowledge, this book will be around.

I would recommend Fahrenheit 451 to anyone who loves dystopian novels.  Anyone who truly loves books and the written word, in that savory way, would also enjoy this book, I think.